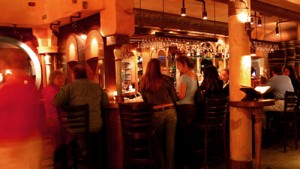 Zambra’s team is headed by Peter Slamp in the front of the house, with chef Adam Bannasch inspiring the kitchen. Originally owned by Public Interest Projects, Peter and Adam earned majority shares in the business as profit over a reasonable rate of return was credited to the purchase price. Asheville gets a great restaurant, and Peter and Adam are vested in its success and deservedly reap its rewards. Zambra has been awarded the Wine Spectator’s Award of Excellence for several years running. Asheville’s home for Spanish wine and tapas has been glowingly reviewed in Southern Living, The New York Times, The Los Angeles Times, The Boston Globe, The Charlotte Observer, and featured on the Food Network. Zambra, a supporter of the Asheville Sustainable Agriculture project, features all natural meats and local organic produce when available. Zambra also boasts the region’s finest Spanish and New World wines, as well as an eclectic cocktail menu.